Much has been made of the discrepancy between who we appear to be online when compared to our offline selves. Anyone with half a brain can probably establish that the online self is one crafted with a pristine curatorial eye—with plenty of important intel excluded from the picture. But the reality is that we don’t always keep this fact at the forefront of our brains when trolling the depths of the Internet and comparing our lives to what we see of everyone else’s. Insecurity, after all, tends to be a much stronger force than logic.

The writer Patrick Stokes over at Aeon Magazine sums up the duality of the self in the online/offline sphere as follows:

But it would be wrong to say that we’re simply being ourselves online, pure and unfiltered. Most of us aren’t catfishing, or creating fictional characters, but we are probably spinning our lives to some extent. In their study ‘Identity Construction on Facebook’ (2008), published in the journal Computers in Human Behavior, Shanyang Zhao and fellow sociologists at Temple University in Philadelphia found that user profiles were not strictly identical with the users’ offline identities, but were rather the identities they would like to establish in the offline world, but have not yet been able to. This illustrates how the online identity that most of us use is, to borrow a phrase from the American philosopher Stanley Cavell, our ‘next self’. Dress your avatar for the life you want, not the life you have.

The way we present ourselves on online platforms, then, is deeply aspirational. Though life has always been somewhat of a performance, the Internet has increased this notion tenfold, providing everyone with various outlets for depicting who they want to be and what they want to represent. Thus, we tend to share only what we want people to see—and, yet, can begin to feel inadequate when everyone else’s perfect pictures appear more all encompassing or authentic than our own.

To prove my point, all you have to do is look at my very own Instagram. According to that, my life is pretty rad, 24/7. I eat yummy food, go out with friends, and take pictures of myself which would imply that I feel good about myself. All of these things are true–sometimes. But what they don’t show is that I still have a lot of anxiety about what I eat, I sometimes think that I look like a deformed little boy or some sort of sea creature (depending on the day), I endured a lot of family tension over my Thanksgiving break, and I talk to a therapist once a week in order to stay vaguely sane. My life often feels so imperfect that I think one of the reasons I document it so much is to prove to myself that it’s not as far gone as I might think. Capitalizing on the not-awful moments, you might say. 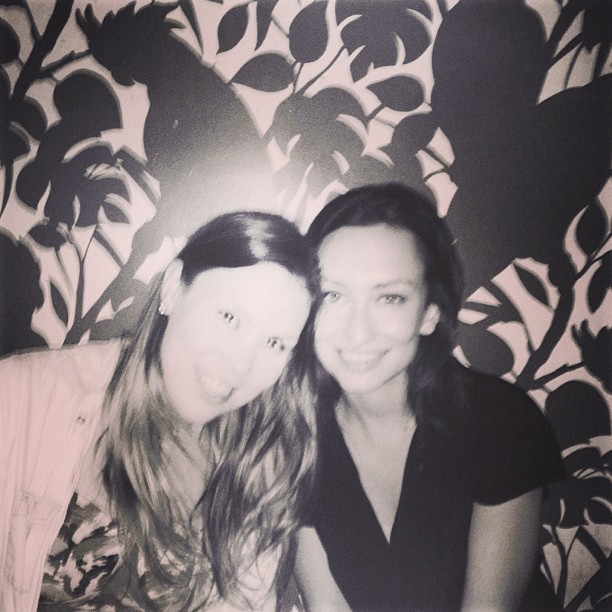 BLURRED LINES REDUX: IN WHICH WE ARE NEVER NOT HAPPY ON INSTAGRAM

But if we could take an omniscient viewpoint, we’d realize that everyone is essentially “putting on” in this way. We are sharing our good hair days, or the days when we feel confident enough to laugh at the bad ones. We are sharing the occasional fancy meal or drink, not the dry bowl of cereal eaten for dinner in bed the night before. We are sharing many more smiles than we are frowns, generally leaving loss, heartbreak, ambivalence, and anxiety for the offline realm.

Many people use this fact to attack the Internet, wagging their fingers at its promotion of what some would call superficial narcissism. To that I say, choose your battles—this is definitely not one worth fighting. Humans have been self-obsessed since long before the World Wide Web, and we have been trying to explore and construct those selves in myriad ways prior to this time period. Most new technologies simply widened the arena for this act of performing, of trying to promote our ideal self.

The selfie existed before the Internet, living spaces were decorated along specific lines—to depict a specific lifestyle, people gave thought to what they wore, where they ate, and who they spent time with. And they photographed a good majority of it, eventually placing photos in albums and scrapbooks to share with guests. The first Instagram, if you will. Less omnipresent, perhaps, but present nonetheless.

In the scheme of supposed crimes wrought by the Internet, the ability to curate the self along one’s own lines should be considered null. If you want to pick a bone, regress to age 30 or under and try to communicate with this generation’s twenty-somethings. If the Internet has robbed us of anything, it has made face-to-face interaction significantly more awkward than it should be. But that’s another animal, for another time.